TORONTO, May 2, 2019 – Seven prominent journalists from the past are being honoured by National Newspaper Awards named after them.

Norman Webster and the late Claude Ryan had their names attached to awards in 2018, and they have now been joined by five others: George Brown, John Wesley Dafoe, E. Cora Hind, Bob Levin and William Southam. Thanks to private sponsorships, awards named after these individuals will be presented on Friday, May 3, when Canada’s news industry gathers for the presentation of the 2018 NNAs. 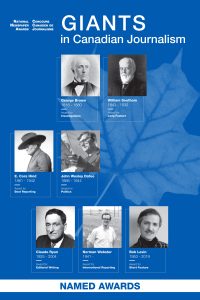 One of the roles of journalism is to afflict the comfortable – and George Brown (1818-1880) certainly did that. He created the Globe in 1844 practically for the purpose of afflicting the comfortable Governor General of the day, who had appointed ministers and public servants without ensuring those appointments had the backing of the elected Assembly. For Brown, fairness and compliance with constitutional principles were worth fighting for. A biographer wrote that the Globe under Brown set forth accusations of corruption and double-dealing in an era of shadowy political morality, and backed them up with hard evidence. This award honours outstanding investigative journalism of the sort that would make George Brown proud of its power to afflict the comfortable.

In 1886, the son of a lumberjack from backwoods Ontario arrived on the prairie to work at what was then known as the Manitoba Free Press. So began John W. Dafoe’s climb up the ladder that would not only make him the long-time editor of the Free Press, but also have him called the greatest Canadian journalist of his time. Dafoe (1866-1944) was editor of the Winnipeg Free Press from 1901 until his death in 1944. During his remarkable tenure, the Free Press was considered one of the great newspapers of the world, and Dafoe’s writings were required reading in the corridors of power. He served on the Canadian delegation to the Versailles peace conference, was chancellor of the University of Manitoba and published books on Wilfrid Laurier and Clifford Sifton.

E. Cora Hind (1861-1942) was a trailblazer and ground-breaker in the annals of Canadian journalism. But her illustrious career came close to never beginning, because of her sex. Her first approach, in 1882, to the Manitoba Free Press was turned down because the newsroom was “no place for a woman with no journalism experience.” Undeterred, she tried again, submitting an article that was published without acknowledging her as the author. In time, the doors of the Free Press were finally opened to Hind, who became renowned for her coverage of agriculture. But the contributions of Hind, who would become the first president of the Canadian Women’s Press Club, were not limited to journalism – she was also instrumental in helping women gain the right to vote, working alongside Nellie McClung and others in the suffrage movement.

Bob Levin (1953-2019) was a true writer’s editor, and short features were his specialty. He understood not just the power of the story being told, but also the nuance of each word choice and the elegance of rhythm and structure. An accomplished author himself, he knew how to craft a gorgeous line but was always mindful of the writer and avoided forcing changes. Soft-spoken, thoughtful and wise, Levin was the sort of editor every journalist wants: someone who could help you find the best expression of your story, in a voice you never quite realized you had. One writer who worked with him said Levin approached editing with the finesse of a surgeon and the gentle touch of a poet.

You may remember Claude Ryan (1925-2004) best as the head of the Quebec Liberal party, where he led the “No” forces in the 1980 referendum on Québec sovereignty. But his impact was just as great in the world of journalism, where he began as an editorial writer for Le Devoir 1962 and after two years became the editor-in-chief. His influence grew much broader than that strictly associated with his role as an editorial writer. He won numerous awards, including the National Newspaper Award for editorial writing in 1964. Following his political career, Mr. Ryan was a professor of Catholic Studies at McGill University and a prolific author of books on Quebec, religion and society. He is remembered as deeply engaged, generous, honest and rigourous.

William Southam (1843-1932) began his long newspaper career in 1855 in the humblest of jobs: as a 12-year-old carrier for the London Free Press. Two decades later, he had risen to hold shares in the business, which he sold to take a gamble. Scraping together $6,000, William and a partner bought a faltering newspaper in Hamilton named the Spectator, laying the foundation for what became the Southam Company, the country’s first and largest newspaper chain. It grew to include The Ottawa Citizen, Calgary Herald, Edmonton Journal, Winnipeg Tribune, Montreal Gazette, Vancouver Province and Vancouver Sun. Its founder’s name lives on in the William Southam Journalism Fellowships at the University of Toronto’s Massey College.

Behind his thoughtful demeanour, Norman Webster has always been a fierce competitor – as hockey player, triathlete or journalist. Returning from a Rhodes Scholarship at Oxford, he began on the night police beat at the Globe and Mail, then served in the Globe’s Quebec City and Ottawa bureaus and as Editor of the Globe Magazine before being posted to Beijing. In 1971, “ping-pong diplomacy” changed everything, and Norman beat the world with reports and photos of that startling breakthrough. He won the National Newspaper Award for International Reporting and went on to serve as London correspondent before becoming Editor-in-Chief of both the Globe and the Montreal Gazette. He lives today in Sainte-Catherine-de-Hatley, Québec.