TORONTO, May 3, 2019 – Coverage of the truck-bus crash that killed 16 members of a junior hockey team in Saskatchewan was spotlighted when the 2018 National Newspaper Awards were announced at a gala Friday night.

Kevin Mitchell of the Saskatoon StarPhoenix was named Journalist of the Year for his extensive coverage of the aftermath of the crash that killed 16 members of the Humboldt Broncos organization. The Journalist of the Year is selected by a panel of three past NNA winners from among the category winners each year; Mitchell had been announced earlier in the evening as winner of the Sports category.

The Humboldt crash story also took top honours in the Breaking News category, which was won by a team of journalists from the Canadian Press. That category is for coverage in a 36-hour period immediately after major news breaks.

In addition to Mitchell’s work, the StarPhoenix also won the News Photo category, for Kayle Neis’s picture of hockey sticks planted in a snowbank to pay tribute to Broncos killed and injured in the crash.

The Globe and Mail took top honours overall, winning 10 of 21 categories. The Globe had 20 finalists spread over 13 categories, including all three finalists in the Business category.

Grant Robertson of the Globe and Mail won for the seventh time in his career, this time in the Long Feature category for a story about an experiment that allowed some laboratory monkeys to “retire” rather than be euthanized after medical researchers were finished with them. Robertson has been a finalist 12 times.

The StarPhoenix and the Canadian Press each had two wins on Friday. Aside from the win for Breaking News, the Canadian Press also won the Sports Photo category for a picture by Andrew Vaughan of a mixed martial arts fighter after a brutal match. This was the third NNA Vaughan has won during his career.

There were 63 finalists in 21 categories, selected from 951 entries for work published in 2018. The competition is open to daily newspapers, news agencies and online news sites approved by the NNA Board of Governors.

This was the 70th year of the awards, which were established by the Toronto Press Club in 1949 to encourage excellence and reward achievement in daily newspaper work in Canada. The awards program has operated under its current administrative structure since 1989.

The three Journalist of the Year judges were effusive in their praise for Mitchell’s coverage. They said it was deeply reported, beautifully written without being maudlin or over the top, and sharply focussed not on politicians and officials but on real people who were touched in one way or another by the crash.

The judges said Mitchell never seemed to tire of the assignment, avoided any temptation to reach for colour, and continually came up with creative new approaches to his reporting. One judge said, “You just kept wanting to read his stuff.” Another said Mitchell made it all seem effortless, with stories that spoke to both the head and the heart. Judges called his reporting on Humboldt “transcendent” and said it was the kind of work all journalists covering tragedy should aspire to. 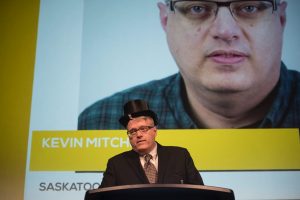 Winner: Chris Hannay and Daniel Leblanc, Globe and Mail, for investigating the National Gallery of Canada’s botched attempt to sell a major piece of art by Marc Chagall in order to free up money to buy another artwork.

Finalists: Jonathan Dekel, Globe and Mail, for a feature about how the members of Radiohead continue to deal with the death of one of their crew members when a stage collapsed in Toronto almost seven years ago; Fanny Lévesque, Katia Gagnon and Véronique Lauzon, La Presse, for exposing how the head of the Montreal Symphony Orchestra used his authority to engage in psychological harassment and sometimes physical aggression against musicians.

Winner: Zosia Bielski, Globe and Mail, for coverage of gender and sexuality.

Winner: The Canadian Press, for team coverage of the truck-bus collision that killed 16 members of the Humboldt Broncos organization.

Finalists: Paul Waldie, Globe and Mail, for an investigation that revealed how Canadian corporate money helped to finance Islamic State terrorism abroad; Geoffrey York, Globe and Mail, for finding evidence of questionable conduct and connections to corruption in South African business deals made by Bombardier and Export Development Canada.

Winner: Carolyn Abraham, Globe and Mail, for “Cracks in the Code,” which explored how science’s ability to “read” DNA has far outpaced its capacity to understand it.

Finalists: James Bagnall, Ottawa Citizen, for a thorough explanation of how the federal government managed to end up with its deeply flawed, and very expensive, Phoenix employee pay system; Douglas Quan, National Post, for discovering how the municipal government in Richmond, B.C., was dealing with cultural challenges it faces as the “most Asian” city in North America.

Winner: Chris Donovan, Globe and Mail, for a photo of a woman saying farewell to a friend just before her medically assisted death.

Finalists: Andrew Vaughan, Canadian Press, for a photo of fog shrouding the waterfront during flooding in Fredericton; Gavin Young, Calgary Herald/Calgary Sun, for an image depicting an oasis of calm on the otherwise raucous Calgary Stampede midway.

Winner: Daniel Dale, Toronto Star, for his exhaustive coverage of the deceptions and lies of U.S. President Donald Trump.

Finalists: Stephanie Nolen, Globe and Mail, for her reporting on Brazil, from environmental challenges to social and political developments; Nathan VanderKlippe, Globe and Mail, for an on-the-ground look at China’s crackdown on Uyghurs and repression of Muslim observance.

Winner: Grant LaFleche, St. Catharines Standard, for a year-long investigation that uncovered a political conspiracy to manipulate the hiring of Niagara Region’s top bureaucrat and a secret contract worth more than a million dollars.

Finalists: Aaron Derfel, Montreal Gazette, for uncovering shocking information about violent acts committed against health-care workers at Montreal General Hospital, and the institution’s attempts to cover up the incidents; Wendy Stueck and Mike Hager, Globe and Mail, for a series exposing the deplorable conditions in many rental buildings in Vancouver’s low-income Downtown Eastside, and failed efforts by the city to enforce its bylaws.

Winner: Greg Mercer, Waterloo Region Record, for a detailed probe into the serious health problems that afflicted workers from the region’s once-booming rubber industry, and the apparent reluctance of workplace safety officials to accept their compensation claims.

Finalists: Erin DeBooy, Brandon Sun, for an unflinching look at the personal and human toll caused by methamphetamine use in her community; Grant LaFleche, St. Catharines Standard, for a year-long investigation that uncovered a political conspiracy to manipulate the hiring of Niagara Region’s top bureaucrat and a secret contract worth more than a million dollars.

Winner: Grant Robertson, Globe and Mail, for a feature about an experiment in which three lab monkeys were quietly moved to a sanctuary to retire, instead of facing the death sentence that awaits most animals used in medical research.

Finalists: Isabelle Hachey, La Presse, for a feature about an amazing medical feat: the first facial transplant in Canada; Jana G. Pruden, Globe and Mail, for a story on the aftermath of a fire that left three people dead, and a family destroyed.

Winner: Kayle Neis, Saskatoon StarPhoenix, for a photo of hockey sticks stuck in a snowbank as a memorial to members of the Humboldt Broncos who had been killed in a bus-truck collision.

Finalists: Jonathan Hayward, Canadian Press, for a photo of a man who salvaged his friend’s prized electric guitars after a flood in Grand Forks, B.C.; Darren Makowichuk, Calgary Herald/Calgary Sun, for an image of police officers tending to a fallen comrade.

Winner: Renaud Philippe, Globe and Mail, for pictures documenting the plight of the Rohingya and their escape from genocide in Myanmar.

Finalists: Carlos Osorio, Toronto Star, for photos accompanying a feature story about a 77-year-old woman who was forced to move out of the publicly subsidized building she lived in when it was deemed unsafe; Melissa Tait, Globe and Mail, for an essay about a rugby league that strengthens relationships among its women players, and provides support for families.

Winner: Robert Fife, Steven Chase, Sean Silcoff and Christine Dobby, Globe and Mail, for looking into how Huawei fits in with Beijing’s global ambitions, and just how far Canada was willing to go to accommodate the technology juggernaut’s quest for expansion.

Finalists: Lori Culbert, Dan Fumano and Joanne Lee-Young, Vancouver Sun/The Province, for an in-depth look at what governments had done and were promising to do about affordable housing in one of the world’s most expensive cities; Greg Mercer, Waterloo Region Record, for exposing how the Ontario Conservative party concocted a story that a legislator had sexually harassed a former party intern, in order to nominate a more well-connected party insider.

Winner: Laura Blenkinsop and Christopher Manza, Globe and Mail, for their work showcasing a Brazilian road trip, a major investigation and a true crime saga.

Finalists: Jean-François Codère and Maxime Jean, La Presse, for a highly interactive presentation accompanying a story about a nearly disastrous Air Canada flight; Cameron Tulk, David Schnitman, Tania Pereira and Fadi Yaacoub, Toronto Star, for bringing to life a research project in which reporters fact-checked every question and answer over five days of Question Period, to find out just how much federal politicians speak the truth.

Winner: Zane Schwartz, National Post/Calgary Herald, and Brice Hall, National Post, for “Follow the Money,” an 18-month project that gathered and analyzed more than five million records across Canada to create the first central, searchable database of political donations in every province and territory.

Finalists: Jessica Botelho-Urbanski, Melissa Martin and Katie May, Winnipeg Free Press, for “Ice Storm: Manitoba’s Meth Crisis,” a seven-part series documenting how methamphetamine was ravaging Winnipeg and destroying lives; A Toronto Star team for “Medical Disorder,” an 18-month effort to collect, analyze and report on 27,000 discipline records and 1.4 million licensing records for doctors practising in Canada and the United States.

Winner: Patrick White, Globe and Mail, for a story about a humble, rural attraction – a simple sunflower patch – that had been ruined by a social media mob.

Finalists: Jamie Ross, Globe and Mail, for a piece, in the wake of the fatal Humboldt Broncos bus-truck crash, that explained what playing junior hockey meant to him as he was transitioning from youth to adult and trying to find his way in life; Jon Wells, Hamilton Spectator, for an engaging and poignant story about a couple’s determination to see a man freed from death row in the U.S. for a crime he said he did not commit.

Winner: Kevin Mitchell, Saskatoon StarPhoenix, for deep coverage, spanning a period of months, on the Humboldt Broncos bus-truck crash and its aftermath. (Mitchell was also named Journalist of the Year.)

Finalists: Dan Barnes, Edmonton Journal/Edmonton Sun, for reporting on the sad tale of Dorian Boose, who played in the NFL and won a championship with the CFL’s Edmonton Eskimos, only to end up living on the streets and eventually taking his own life; Mary Ormsby, Toronto Star, for uncovering new information that suggested sprinter Ben Johnson’s drug sample had been mishandled 30 years earlier, and for a story outlining the cognitive decline and personal turmoil faced by legendary boxer George Chuvalo.

Winner: Andrew Vaughan, Canadian Press, for a photo of a downed fighter that captures the brutality of mixed martial arts.

Finalists: Bernard Brault, La Presse, for an image of acrobatic Olympic skiers awaiting results while one of their fellow competitors soars overhead; Ed Kaiser, Edmonton Journal/Edmonton Sun, for a picture showing a Vancouver Canucks player flying through the air as he attempts a shot on goal.

All finalist entries can be viewed at the NNA website (www.nna-ccj.ca).